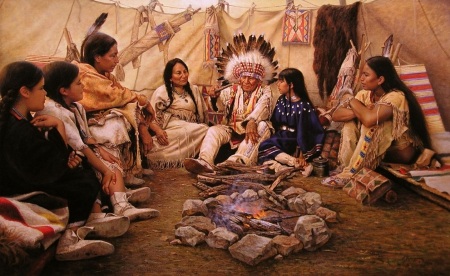 The Cherokee Indians lived in settled villages, usually located near a river.
Cherokee houses were made of rivercane and plaster, with thatched roofs. These
dwellings were about as strong and warm as log cabins. Here are some pictures
of Native American  houses like the ones Cherokee
Indians used. The Cherokees also built larger  seven-sided buildings for
ceremonial purposes, and each village usually had a  ball field with benches for
spectators. Many Cherokee villages had palisades
around them for protection. Today,  Cherokee families live in a modern
house or apartment building, just like you.

Like their distant cousins the Iroquois, the Cherokee  Indians had an even
division of power between men and women. Cherokee men were  in charge of
hunting, war, and diplomacy. Cherokee women were in charge of  farming,
property, and family. Men made political decisions for the tribe, and  women
made social decisions for the clans. Chiefs were men, and landowners were
women. Both genders took part in storytelling, artwork and music, and
traditional medicine. Today, Cherokee gender role traditions have
changed. Cherokee women can be chiefs also. Cherokee men are sometimes
farmers. However, modern Cherokee people still trace clan relationships through
their mothers.

Cherokee children do the same things all children do, play with each other, go to school and
help around the house. Many Cherokee children enjoy hunting and fishing with
their fathers. In the past, Cherokee kids had more chores and less time to
play,  just like colonial children. But they did have ﻿dolls﻿, toys, and games to  play. In one popular
game, Cherokee kids tried to throw a dart through a moving  hoop. Anejodi, a stickball
game related to the Iroquois game of lacrosse, was a popular sport among
Cherokee teenagers and adult men. Like many Native Americans, Cherokee mothers
traditionally carried babies in cradle board carriers  on their backs, a custom
which many American parents have adopted now.